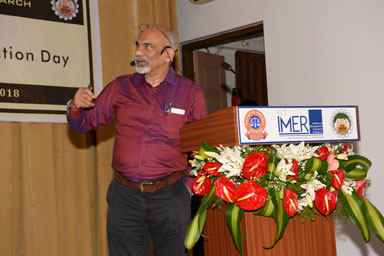 The Director of IIM, Bangalore, Prof. G.Raghuram, delivered the prestigious Gogte Lecture Series Talk in the Area of Logistics on 16th September, 2018 at KLS IMER Auditorium.

Prof. Raghuram began his talk by giving an overview of tier 2 cities in India and spoke about lack of coordination, connectivity, losses and damages in transportation resulting in logistics accounting for approximately 14 % of our GDP whereas it was in the 7% range for advanced economies. These inefficiencies also manifested themselves in turnaround times, and minimum inventory levels that were far higher than advanced economies, and hence were a 5% to 7% cost disadvantage for manufacturers and exporters in a highly competitive global economy..

He proposed a SWIFT Model that is a focus on Sustainability, Warehousing, Information & Communication Technology, Fragmentation and Transport Infrastructure, to reduce cost of logistics to the Indian Economy. He said that policy makers, Industry Associations, Various service providers, and Researchers/Think-tanks should work together for optimum utilization of capacity. He was of the opinion that tier 2 cities like Belagavi had the potential to become future growth centers of the nation as such cities had the required resources and the people. Proper integration between people and the resources in such tier 2 cities was the key to move forward.

Prior to the talk, Prof. Raghuram held an informal discussion for about 45 minutes with thirty leading industrialists and entrepreneurs of Belagavi at the Sandbox at IMER, an Incubation Facility, and said that industry groups like the Chamber of Commerce were vital in representing the interests of industry and proposing solutions.